Gastown is Vancouver’s original neighbourhood. It was founded in the 1860s, long before there was even a Vancouver, by salon owner “Gassy Jack” Deighton (who got his nickname not from a flatulence problem, but from his habit of bragging and talking a big game).

Since its start as a hamlet with dirt streets and wooden buildings, Gastown has seen some major changes. In 1886, a great fire wiped the slate clean and required rebuilding almost every structure in the newly incorporated city. Later, Gastown fell on hard times and became the “skid row” of Vancouver.

In the 1960s, another threat loomed: City Hall laid plans to pave over Gastown and Chinatown to form a 12-lane highway. Thankfully, a grassroots citizen protest got those plans shelved. In 1971 the provincial government designated Gastown a historic area, protecting its heritage buildings, and in 2009 the federal government declared Gastown as a National Historic Site.

Today, Gastown’s old brick buildings – some in disrepair, some remodeled into trendy boutiques and restaurants – rub shoulders with brand-new condo towers along the cobbled streets. It has become one of the hottest nightlife and dining destinations in Vancouver.

I use to work in Gastown, and though my workplace has changed, I still frequently head down to my old stomping grounds. With so many restaurants it can be hard even for locals to choose where to eat. It’s a delicious dilemma to face.

On a sunny weekday in May, the BC Association of Travel Writers (BCATW) hosted a meetup with Taste Vancouver Food Tours to experience their Gastown food tour.

How could I say no to eating my way around Gastown?

By sharing secrets and tales from Vancouver’s storied past, Taste Vancouver Food Tours feeds not just your body, but also your mind. We met our guide Brent at Waterfront Station, and slipped on lemonade as we introduced ourselves and got a rundown on what to expect: a two and half hour walk through Gastown, nicely broken up with lots of stops for sample-size tastings of the area’s finest offerings. 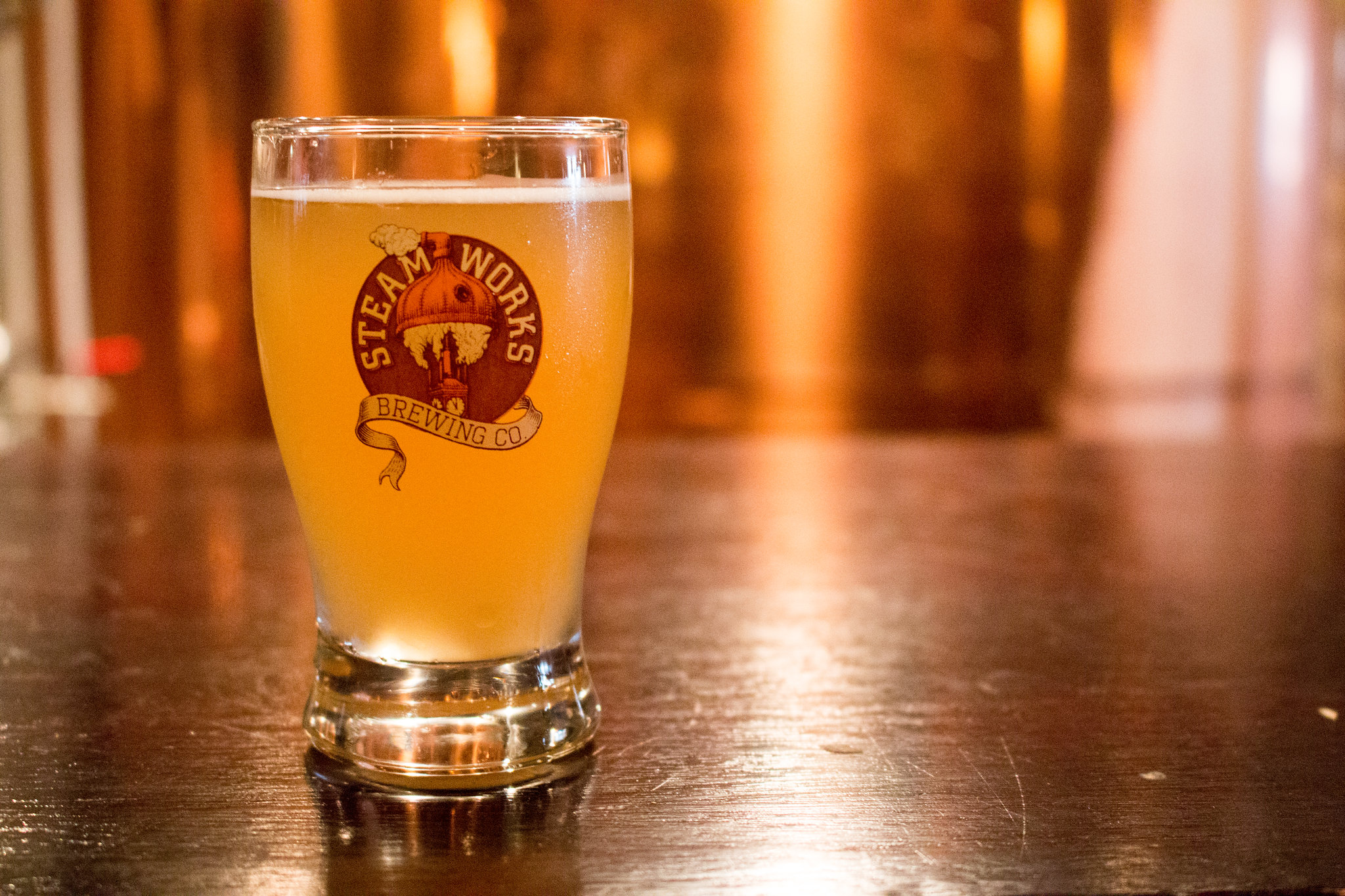 An old favorite happy hour spot of mine when I worked downtown, Steamworks has been located in their historic Gastown building since 1995. If you head to the lower level, you lay eyes on a one-of-a-kind steam generated brewery. As we sampled a Leipziger Gose, we watched the cleaning of the masher, kettle, fermenter, cooling and separating tanks in their nest of Douglas Fir beams and old bricks. I love the atmosphere here, and it’s a great spot to meet friends for beer before hopping on the Skytrain home. 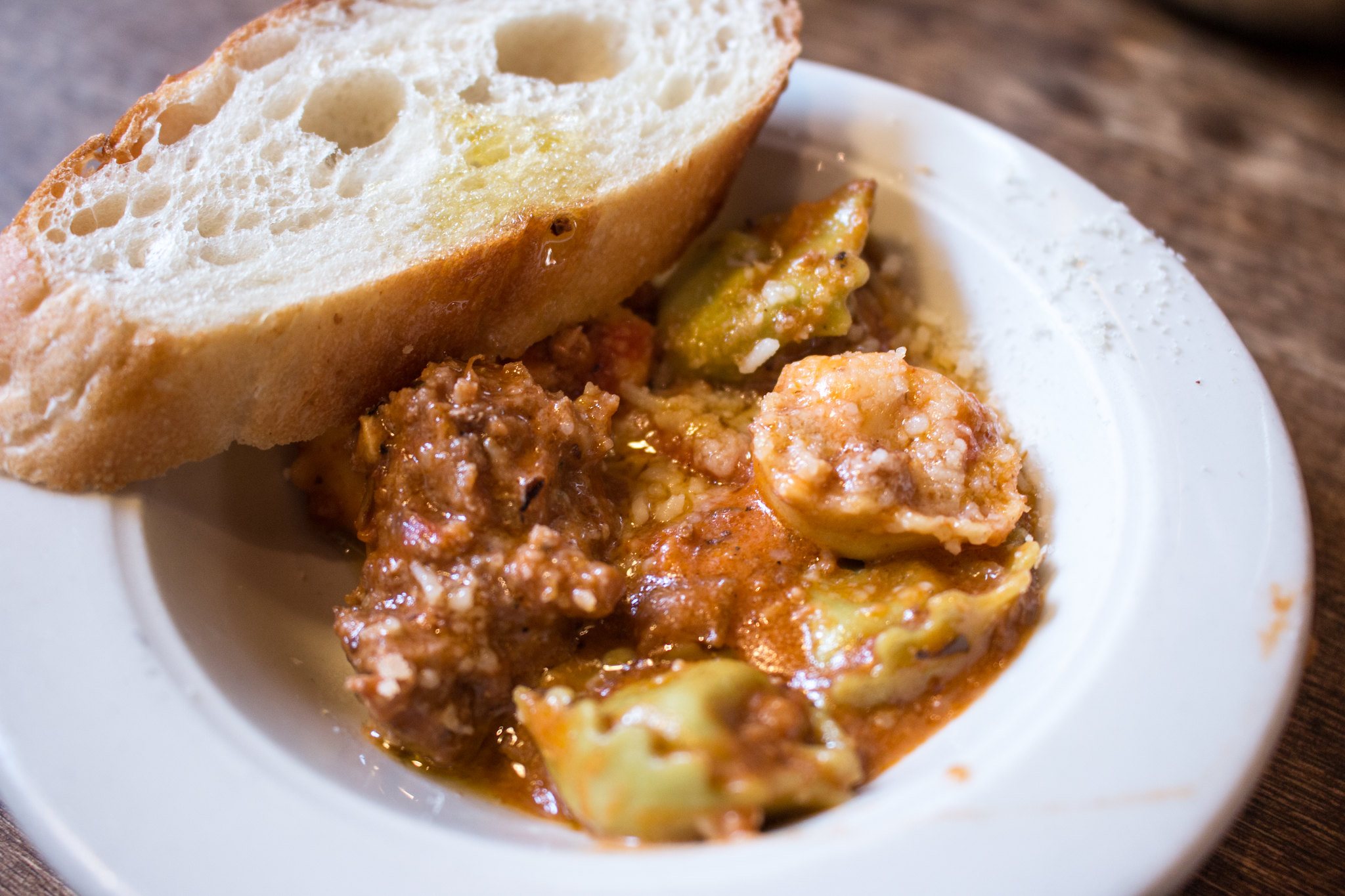 //embedr.flickr.com/assets/client-code.js
As we walked in, the first thing I noticed was their Sangria happy hour special – a sure sign I’ll have to make a return visit on my own time. The cheese tortellini with Bolognese sauce set the bar high as our first food stop. We cleaned our bowls with the fresh-baked bread. Only Brent’s assurance that we needed to save room for future stops kept us from begging for more. 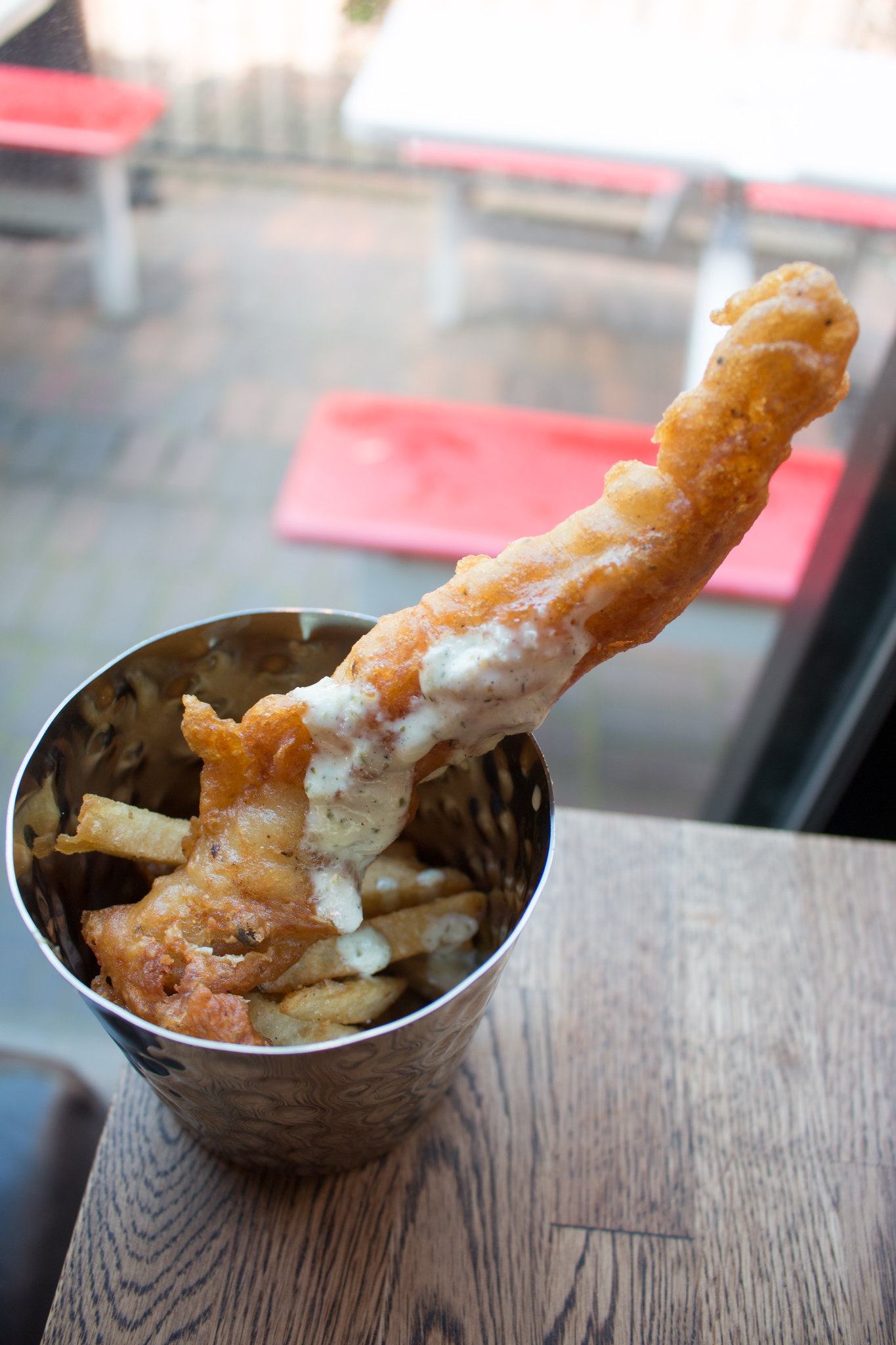 My British heritage makes Fish n’ Chips a go-to comfort food for me. As I dug into them, I checked out their happy hour menu, which was surprisingly affordable for this area of town. Another place to return to with friends after a day in the office. 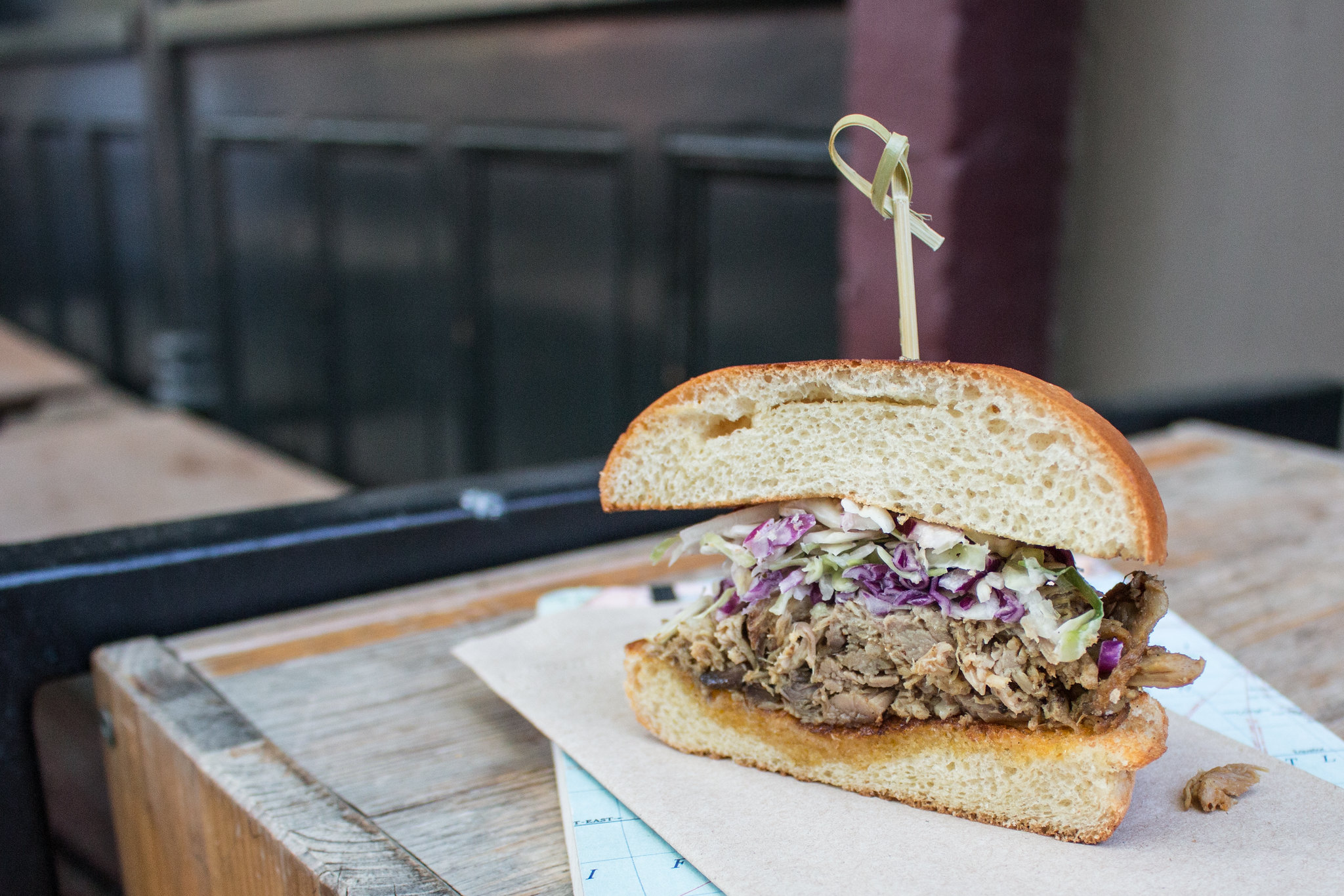 I couldn’t convince the group to delay the tour to stay longer for a whiskey flight, however we loved the sample of the pulled pork sandwich. This Carolina-style Bar-BBQ join makes their own smoked meat daily – a welcome change from chain restaurants that truck in their entrees from some remote central kitchen. I’ll be back to enjoy a full sandwich on their patio. 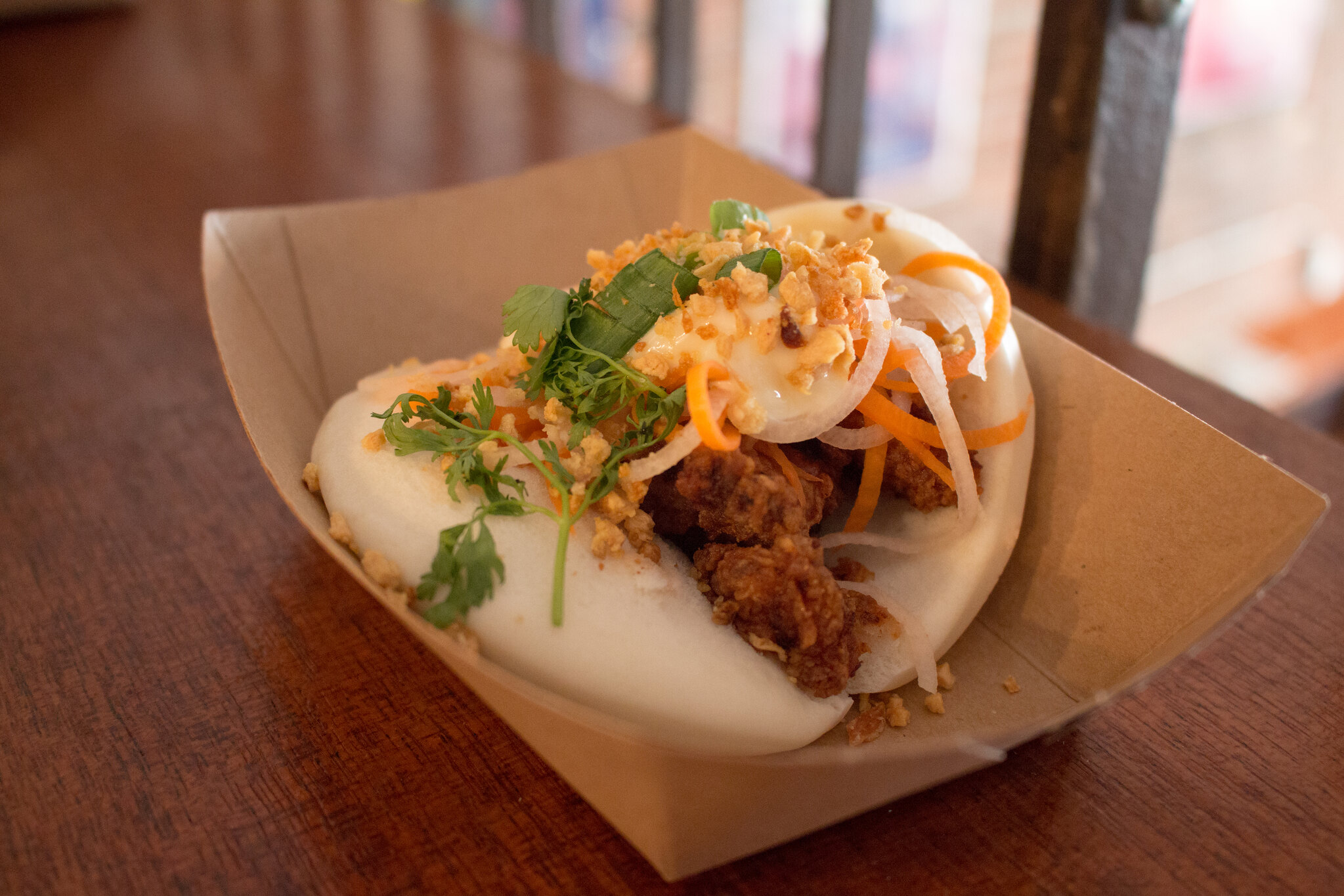 I fell seriously in love with this incredible Bao: the deep fried, free-range Fraser Valley garlic & lemongrass fried chicken is served with crispy garlic, daikon, fish sauce glaze, carrot and garlic scape mayo, then topped with cilantro, pickled carrots, and scallions. I gotta go back to have it again, and to try their Kimchi fries.

Brent shared one of his favourite bits of trivia this stop. Gastown’s old brick buildings were built after the Great Fire. But how did all those these bricks happen to be available? Sailing ships inbound on the trade routes from China carried light, bulky goods such as opium and silk; they were ballasted with cheap bricks to keep them low in the water and stable as they crossed the Pacific. On the outbound run, the ships were loaded with denser Canadian cargo, so the bricks were offloaded and abandoned in stacks on Gastown’s shore, where they stood as the fire raged around them. Today, you can still spot heat-cracked and scorched bricks on many historical buildings. 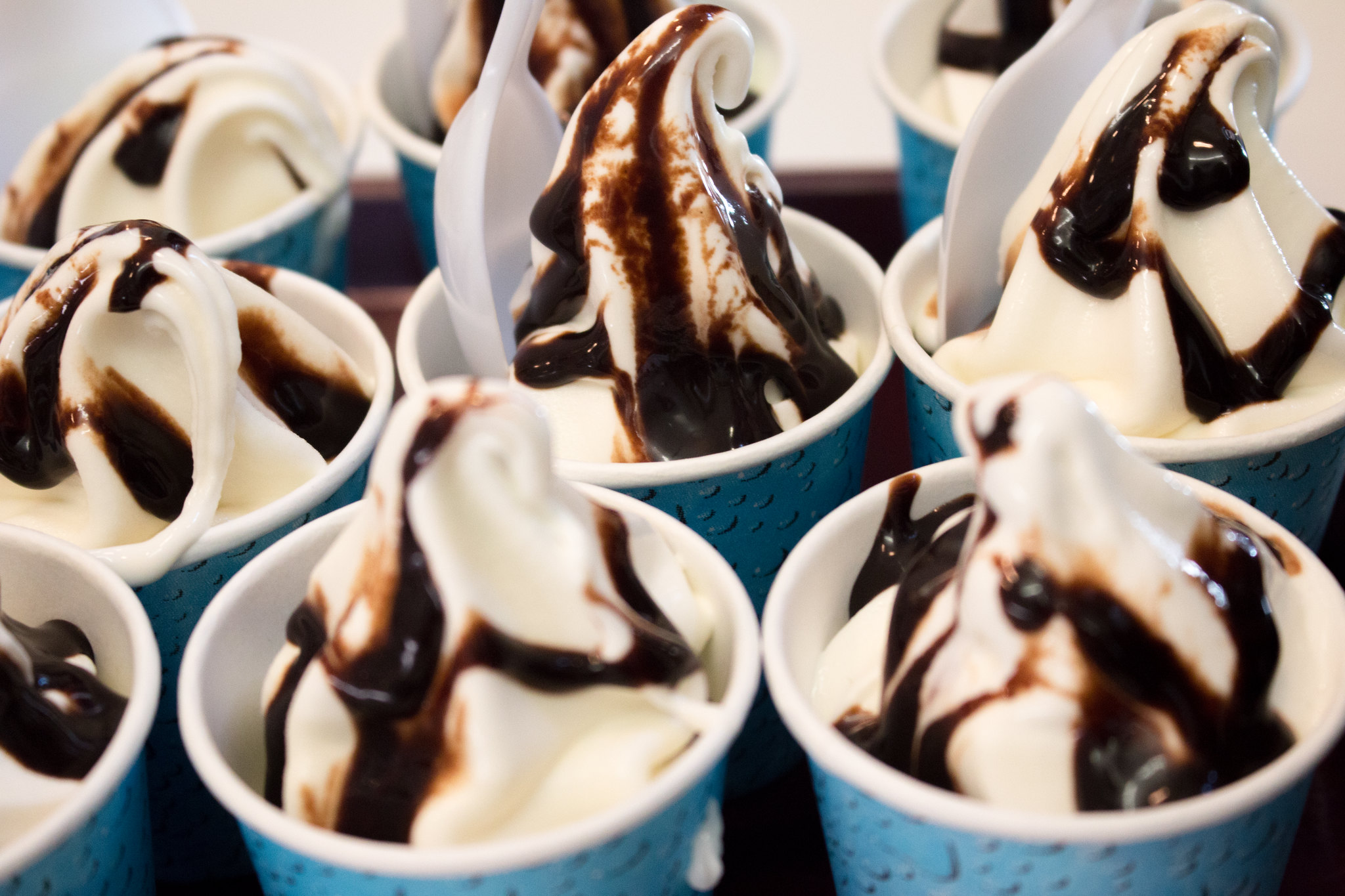 After all the savory dishes we enjoyed, it was time for a sugar infusion. Our first treat was Soft Peaks, where they offer organic soft-serve ice cream with toppings ranging from espresso to blueberry purée.

We continued our ride on the dessert train at this spot famous for their cheesecake and small batch coffee. I opted for a piece of their raspberry cheesecake, but with a display case of mouth-watering options, it was a tough call. 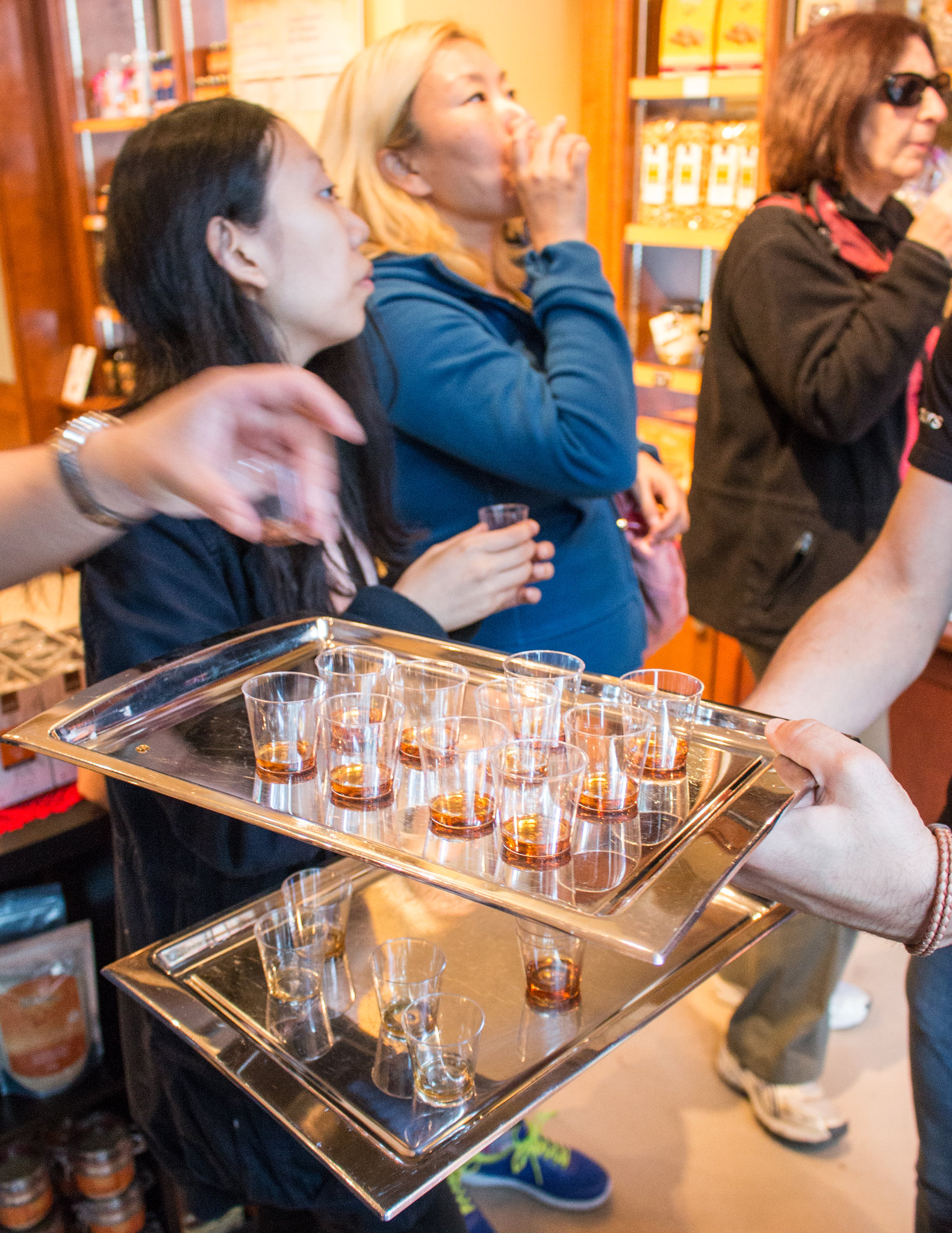 A Canadian staple, maple syrup is my favourite sweetener. However, I’ve never tried shots of it before. We sampled three of the five syrups. Amber, the strongest of them all, was my personal winner. 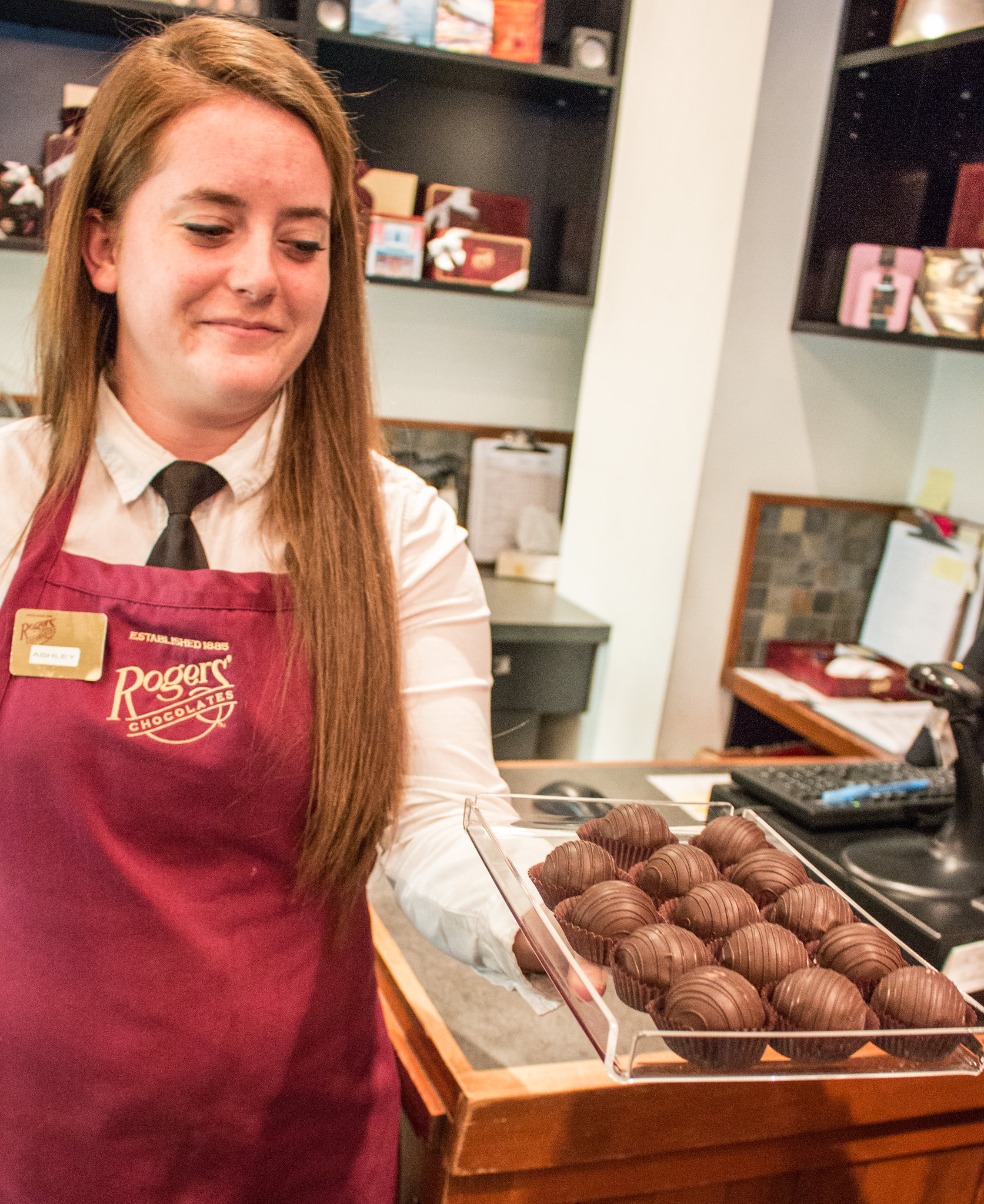 Our last stop was the oldest chocolate company in Canada. We were already buzzed and on a sugar high, but who can resist premium chocolate? I took one large bite just for the pleasure of having the flavors melt in my mouth, then tucked the rest away for a treat later.

The Taste Vancouver Gastown Tour was a perfect way for a foodie to spend an afternoon in Gastown. Brent, who is also a professional actor, kept us entertained and educated throughout the walk. Over our goodbyes, we chattered delightedly about our favourite stops of the day and all the dishes we’d tried. I love food tours, as they let you sample multiple places with a minimal investment of time and money, and draw up a list of restaurants to revisit for the full meal experience. As I walked off the food coma and calories with an evening stroll through the neighborhood, I worked happily on my mental list.
//embedr.flickr.com/assets/client-code.js