This weekend was a happy whirlwind of food, sunshine, and local beer. I hopped over the Strait Of Georgia to Comox for the annual BC Shellfish & Seafood Festival. We had a concert with a seafood feast on the first night and an industry lobster dinner on the next. We also attended a seafood expo where I got to try geoduck, shuck an oyster and learn more about sustainable seafood. Next, we visited an oyster, salmon and geoduck farm before ending the get-away with a spirited Caeser competition.

At the BC Seafood Expo, I picked up some interesting facts during Oysters 101: Lessons from the Producers and the Oyster Bar. In British Columbia, there are only two kinds of oysters: Pacific Oysters, which were introduced from Japan in the 1900s, and Olympic Oysters, which are native to the Pacific Northwest but are now less commonly harvested since they grow more slowly than the imported species. Like wine grapes, oysters’ flavours are influenced by where they are grown; different regions produce distinctively different tastes from the same species.

Like most city folk, I’ve always purchased my oysters at a bar, usually during buck-a-shuck happy hours. Breaking into those little shelly treasure vaults on my own seemed intimidating. But thanks to Brian Yip of Fanny Bay Oysters, I’ve got the basics down and I’m looking forward to showing off my shucking skills at my upcoming housewarming!

1. Start with small or extra small oysters, use a proper shucking knife and take your time.

2. Hold the oyster with the cupped shell on the bottom. Look for the hinge, which will guide to the seam.

3. Find the crevice between the two shells and insert the blade parallel to the seam. Gently but firmly rock the blade back and forth.

4. Once the blade is worked into the seam, twist it. This will pop the shell slightly open.

5. Slide the blade along the inside edge of the shell and the meat, to sever the connecting muscle. Try not to spill the liquid in the shell.

6. Slide the blade under the body of the oyster, as close to the shell as possible, to free it for slurping. Place the prepared oyster on ice for serving, and move onto the next one.

Check out the video for a visual guide:

The BC Shellfish & Seafood Festival is an annual event that happens in June. There is still another weekend to go with events happening till June 21st, 2015. The main festival day taking place on Saturday and includes a chowder competition, shucking competitors, music and lots of seafood to enjoy. If you are looking for a place to stay, check out Old House Village Hotel & Spa. I enjoyed the full-size apartment style rooms, including the use of the sauna, hot tub, and pool.

After the weekend I had, I’m already scheduling this event in my calendar for 2016.

If you go to the festival, please tell me how it was. I’m tempted to jump on a plane, but obligations are keeping me in the city. Also, if you are a pro at shucking oysters, leave your tips below! 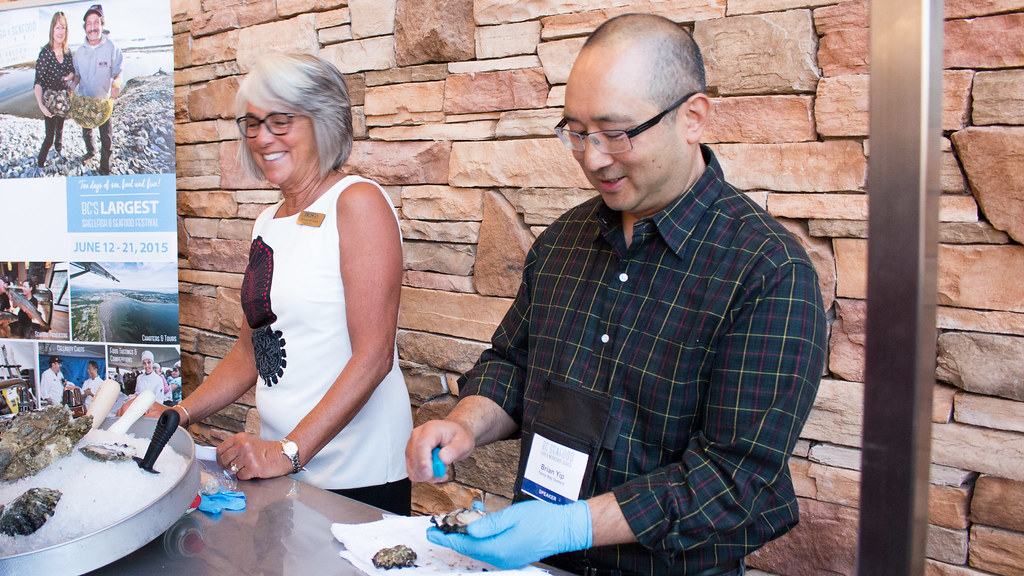 Thank you Comox Valley Economic Development Society for having me as your guest. All opinion are my own, as always.